I wrote this poem back in Bill Clinton’s second administration, and it seems relevant now. It’s in my collection PARADISE, David Robert Books.

Go Down for the President

Go down, go down, all you little men,
Know how the women ignore you;
The President has come to town,
His sacrament is upon their tongues.

Go down, go down, all you husbands,
Cuckolds and fools of the women;
The President has come to town,
He will take care of the poor children.

Go down, go down, all you old men,
Who lost the wars they laugh at now;
The President has come to town,
He is the boy who is immortal.

Go down, go down, all you narrow men,
Who kept the promises the others broke;
All the girls just love a sailor
Who has a girl in every town.

Go down, go down, all you working men,
Who make the houses and the chairs;
The President has come to town
And they burn the chairs upon the floor.

Go down, go down, explorers, adventurers.
While you were gone the big boy came
And smiled and made himself at home,
And the women couldn’t help themselves; 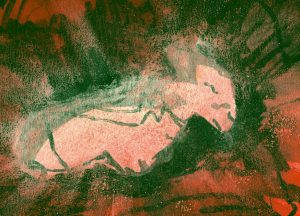 (“The Lamb” by Annemarie Estor)

With colossal fellows
With spatters of goo high up on their groins
with numbed knuckles, kyrie eleison!

Haul out blankets from chests,
set tree-stumps on grid-irons to dry.

Save the fire in pots
for the sun will slow down,
and the air is falling apart in crystals
and stone will become as clear as water.

And we speak of sunrise and sunset.
We believe in our deceit. For the sun doesn’t suck itself
out of the swamp on the horizon. Doesn’t quench itself in those red ditches.

It’s all just language. The sun sails on indifferent.
She hears at a distance how loudly
We call upon God, and how cutting the wind.

One seeks echoes in vaults,
another the trilling in his brain.
Some call upon whatever is hiding
beyond the slums, further yet,
where the light burns behind the last encampment.

But the sun is not ours
and God is hiding behind the fagots,
in a pleat, in clumsy chanting.

So set fire to the wings for the guests from afar.
Make meat for the battlers. Scrape out the horses’ hooves.
Give the animals blankets of felted cobwebs.
Make soup. With lots of onions. For everyone. But mainly
for whoever feels that the end is coming.

For it is coming. Not on a horse,
not on wheels; not with battering rams,
but with a pain in the flank, a twitch of capillaries,
in a bit of disturbed code. A breath in the night-fog,
a stitch in a nerve-track.

But before the end demands its toll:
Set fire to the straw!
Toss everything over the beams!
Make everyone choose: bellow or be silent.

And ride her!
Ride her, that filly, that mare!
With one body made of fifty storm-lions!

Take her hard!
Make her feel who’s boss.
Clamp your hand like a trap round her neck.
Push out her shins, sign her
to fold her arms,
and take her in the pleat that bursts open on its own.
Splash in her loins.
Tear her open, now you still can!

Pierce her!
Find there the fire in her womb.

Pierce her through!
Find language in her belly.
Language of iron, nest of blood,
radioactive vowels,
and a radiant lamb.

Annemarie Estor (1973), is a poet, an independent researcher in cultural studies and a copy editor at the Dutch-Flemish Streven Journal. She has a PhD in the Humanities from Leiden University, Netherlands, 2004, and was a fellow of the International School for Theory in the Humanities, Santiago de Compostela, Spain, 1999. She has published three volumes of poetry, all of which were awarded or nominated for literary prizes. Her works, often long narrative or epic surrealist poems, appear at Wereldbibliotheek Publishing House in Amsterdam. Her next narrative poem, No Man’s Land Night, will appear in April 2018.